The Industry’s Standard Since 1929! 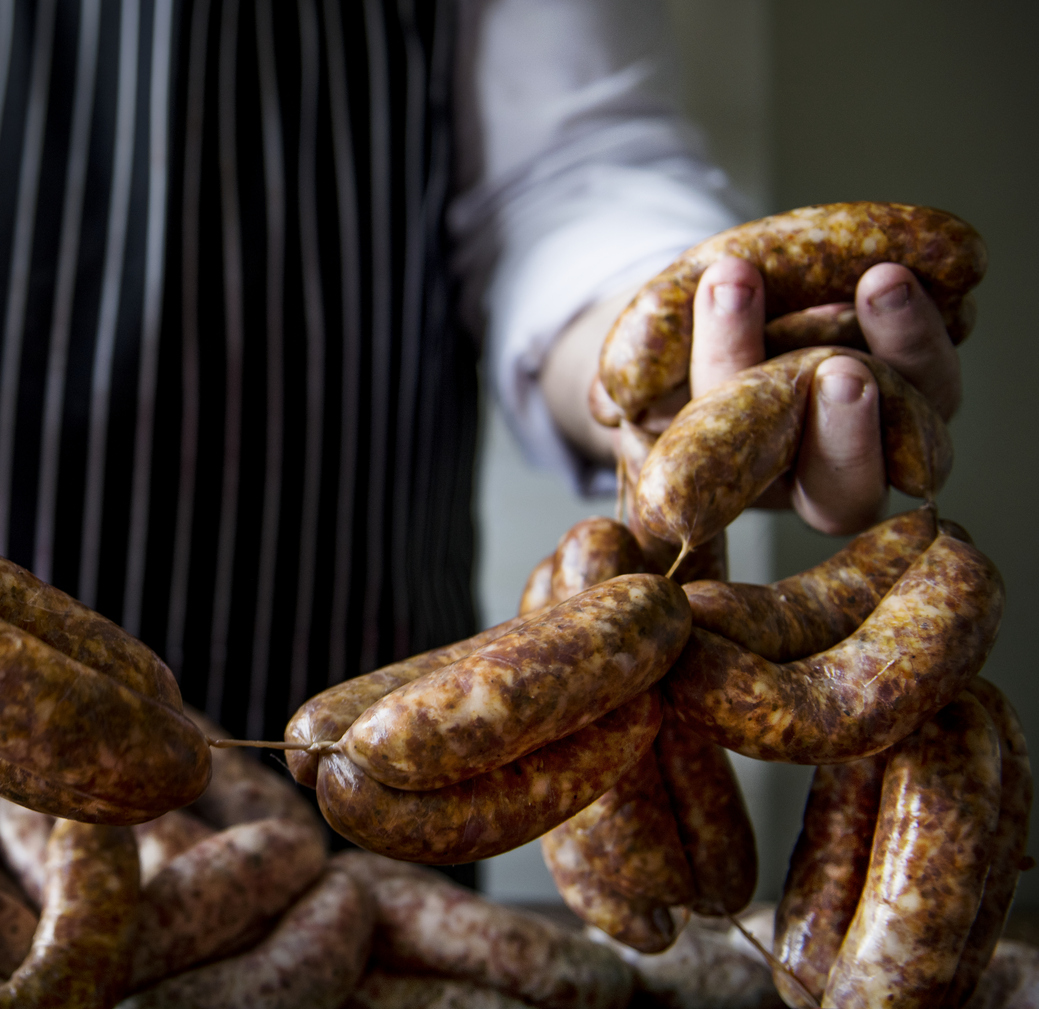 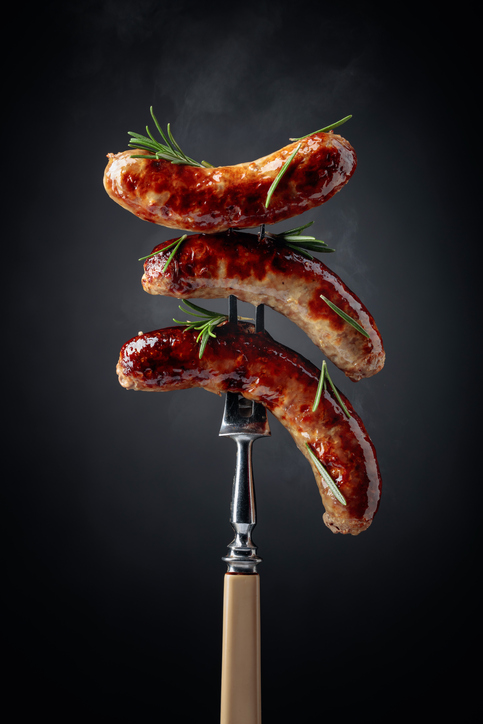 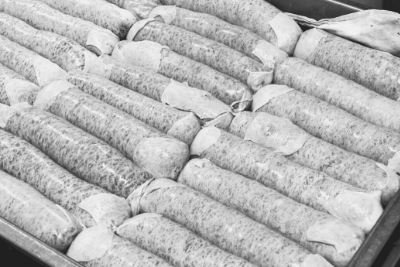 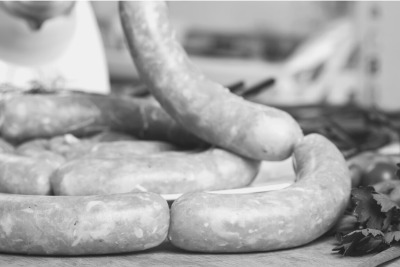 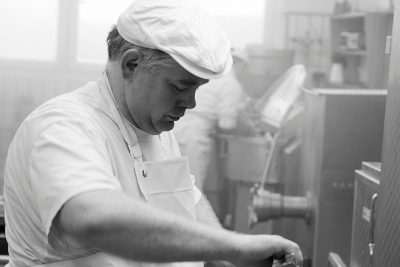 About Famco- The Industry Standard Since 1929

Since 1929 when we originated the automatic sausage linker, Famco has been the standard for sausage production, reliability, and most of all consistency of performance. Every Famco is the product of more than half a century of constant product improvement. Today, Famco can build you one of three different machines that can efficiently match your requirements for various types of products. Famco linkers are sized for the largest to the smallest production runs. FAMCO — the only name you should trust when you want the most effective, profitable, and long-lasting equipment for your linking needs. Famco linkers are an integral part of any collagen casing pork sausage operation. They automatically assure uniformity of link length and with the uniform diameter of collagen casing, portion control results! Eliminates waste or giveaway.

Use Famco for Seasonal or Nationality Products

Whether it’s pepperoni, Italian sausage, Polish sausage, or Bratwurst, Famco links 75 feet of stuffed product per minute. The full-size Model Y Famco can produce links up to 14 inches in length and 36 mm in diameter. All Famos adjust automatically to casing diameters.

The Model Y Famco links sheep casing franks fast without the need for skilled labor. Every Famco is built to last, designed to be easy to clean and to run efficiently with a minimum of downtime. 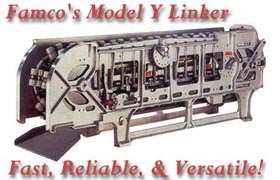 Here’s the machine on which we built our reputation – the Model Y Famco linker. This is the sausage industry’s standard, able to produce many kinds of linked sausage products at high speed and profit. The Model Y can twist links from 4 to 14 inches long, adjusting automatically to casing diameter. It can produce links at the rate of 75 feet per minute without strings or clips. Model Y features unmatched performance in twisted links with closed ends. 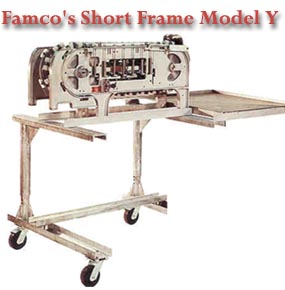 Short Frame Famco Model Y Linker is smaller, more specialized for the smaller producer. It is ideal for the packer producing up to 3,000 lbs. of linked pork sausage per week. (For higher production, we recommend the full-size Model Y as a more practical machine.) The short frame model is engineered specifically to produce 4, 5 or 6-inch links in small diameter casing. It can cut automatically in singles, pairs, or even continuous linking. Like all Famco Linkers, this linker is made of materials that are strong and easy to clean. The optional linker cart shown above adds mobility for efficient production. 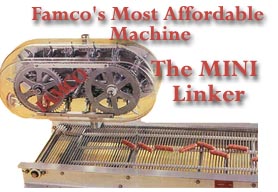 Simple, and more affordable, Famco’s Mini Linker brings
a new concept to high-speed sausage making. This handy machine forms links from a stuffed strand by pinch and cut, pinching for a positive closure and then cleanly cutting the links apart. Famco Mini links up to 260 links per minute. Produces all popular lengths. Forms and cuts any size casing up to 35 mm in diameter. Features easy maintenance as well as easy change of cut-off blades. The proven Famco Mini is priced well below competitive form and cut machines. It is also ideal as backup equipment. 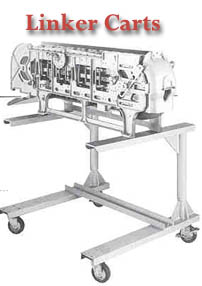 Linker Carts Enable you to roll your Famco into a working position in seconds without lifting. And, at the end of production, you simply roll your Famco to a cleaning area or storage area. Carts have 5-inch diameter ball-bearing coasters with grease-resistant neoprene read. Casters lock to hold the cart into position. Height adjusts to a 39-inch maximum, 34-inch minimum. Cart extends 28 inches over the table. Rugged welded structural stainless steel construction.

Famco Stainless Screen and Drip Pan- avoid excessive moisture when producing natural casing products! Your product is stuffed out on a stainless steel grid under which a stainless drip pan collects moisture. Grid and pan set have attachments so that they can hinge to a linker cart, substituting for a table in the horizontal position and storing on the cart in the vertical position. an excellent investment in efficiency! Dimensions (inches): 36-1/2 on hinge side and 32-1/2 deep.

Since 1929 when we originated the automatic sausage linker, Famco has been the standard for sausage production, reliability and most of all consistency of performance.

The Allen Gauge & Tool Company, presently located in the Homewood section of Pittsburgh, PA was founded in 1914 by the late Charles H. Allen. Mr. Allen was born in 1870 and lived during the era of rapidly expanding mechanical and electrical developments in the United States. He perfected his mechanical skills under the tutelage of his father, a Civil War Veteran who ran a model-making business in Dansville, New York. Indeed, much of the early work of Allen Gauge & Tool Company was in the field of model making and development work for investors who needed their ideas translated to mechanical engineering and model works, which reflected this specialty. Located in downtown Pittsburgh until 1938, General Engineering and Model Works was to become further known as a quality “job shop”, a machine shop that could handle miscellaneous metalworking jobs from simple milling and turning to complex precision die work. Job work was done for many of the large Pittsburgh companies, but the model and development work continued for the inventors who had ideas to pursue. One of these was Mr. Bill Fried, a partner in the Fried & Reineman Meat Packing Company, who needed a labor-saving device to mechanically link sausage. Another was Dr. C.E. Ziegler, a well-known obstetrician, who had the company develop special Funis clamps and forceps, which were to become standard equipment in area hospitals for many years. In another field, Mr. Allen’s skill as a precision craftsman attracted inspectors from the local pipe mills who needed accurate gauges designed and developed to measure their tubular products. This was in the 1930s when the American Petroleum Institute began the standardization of the drill pipe, casing, and other products used in oil wells. Eventually, precision gauges and tooling became the primary business, and in 1938 the company name was changed to Allen Gauge & Tool Co.

By the mid-1930’s the cramped quarters in downtown Pittsburgh had become inadequate. Consequently, a building was purchased at Braddock Avenue and Finance Street in the East End. Additional equipment was added, including precision thread grinders, and by the time world war II had begun, Allen Gauge & Tool Co. had become a major producer of close tolerance gauges and equipment desperately needed by the Armed Forces. The Company was on a 24-hour working day during the war years, and many of the employees were exempt from military service because of their skills that were needed to produce critical war material.

There was no chance to develop peacetime products while on a 100 percent war work, and in 1945 when all defense contracts were canceled, a critical period developed for the Company. Although there was a small demand for pipe gauges, tool and die work was scarce, and unless a standard product could be developed and successfully marketed, there would be a real danger of collapse. A decision was made to pursue the sausage linking machine which had been developed in the late 1920s. There had been very little need for this labor-saving device during the depression years when an abundance of cheap labor was available. Conditions had changed then and it was believed that the machine had been perfected to the point that it could be sold to the sausage industry.

In the early development stage, a separate Company had been formed by the three principals involved: Messrs. Fried, Allen, and Morris. Taking the first letter of their last names and adding “CO”, the Company and the machine became known as the “FAMCO” Sausage Linker. Before further work could be done, legal and physical problems had to be overcome. Design drawings and titles had to be purchased from the other principals, die casting dies had to be bought from the former producer, new die casting machines had to be built for the shop, parts, hardware, and tooling had to be bought, and workers had to be trained. After a considerable struggle, 25 linkers were assembled and sold. Unfortunately, all 25 machines were returned for further work. Slowly, the problems were worked out and in the next decade, the FAMCO business grew to be about 50% of the total Company business. During this period, job work and the precision gauge business continued to be pursued and the Company’s reputation advanced. By 1954, Mr. Allen had guided a fledgling company through 40 years of business, good and bad, including a precarious startup period, two wars, and the Great Depression. He died in 1955 at the age of 85, leaving behind a multitude of loyal friends and associates, and a Company that would continue to prosper under the leadership of his sons, Rosslyn C. Allen and Charles H. Allen, Jr.

In the early 1960s, development occurred in the sausage industry that increased the FAMCO linker sales dramatically — a new type of sausage casing was marketed. At the time of introduction, the FAMCO was the only machine available that could successfully link this new product. The demand for FAMCO linkers in the United States and in foreign markets expanded to the point that manufacturing facilities were started in Scotland to produce machines for Europe and other export areas. FAMCO sales in that period grew to about 80% of the total Company business. The remaining 20% was divided between Precision Gauge Sales and job work. In the next decade, oil exploration increased and the demand for gauges become heavy enough that job work was phased out and the Company concentrated on only two products: Precision Gauges and FAMCO Sausage Linker. In the 1980s, the oil boom had begun to subside and competitive sausage linkers had appeared on the market, and in 1986, it became necessary for the first time to reduce the number of shop employees needed. In the 86 years that have elapsed since Charles Allen decided to start his company, many businesses, large and small in the Pittsburgh area have ceased to exist for one reason or another, but Allen Gauge & Tool Co. continues to operate. Business conditions are slow in 2000, but no worse than some of the other critical periods that the Company experienced in earlier years. Charles H. Allen, Jr. the current President of the Company is confident that Allen Gauge & Tool Co. will continue to flourish. It may be interesting to note that FAMCO has sold 4000 standard linking machines to date. Of this total 3,000 have been sold in the USA and Canada. Since 1975, 1000 have been sold in various countries such as Great Britain, France, Norway, Scotland, Finland, Japan, Taiwan, and the continent of Australia.

We are also proud to say that since 1982, we have sold over 500 MINI Machines. Although these machines do not twist, (they pinch and cut), they have complemented our overall sales program. At the present time, we have an agent, Pemberton and Associates, Inc., representing us in Canada. We also have an agent, Mr. Fergus Tobin, and Valentine Equipment Co. in Sacramento, California representing us in eleven of the Western States. Our two salesmen, Dick Carson and Bud Kelly, who have been with us since the late 1950s, represent us in the remaining states. Mr. Pemberton and Mr. Tobin have been with us since the early 1950s. Our goal today is to expand our market, continue to produce a better product, and keep our prices reasonable.

Contact Famco USA for information about our products, sales, distribution or maintenance.